While the serology test is a useful test for surveillance, we want to be cautious with possible ‘mountain effect’, especially during the first several months from the diagnosis and treatment.

The risk of recurrence is the highest during the first 3-9 months from initial diagnosis. In addition, the serology titer may stay relatively high (as it falls following the treatment of the primary tumor) during that time, which could mask a small increase of titer from the development of a new tumor.

The MCPyV ( Merkel cell Merkel cell Merkel cells are found in the lower part of the epidermis. Although the exact function of Merkel cells is unknown, they are thought to be touch receptors. Also known as neuroendocrine cells, they have machinery similar to nerve cells and to hormone-secreting (endocrine) cells. polyomavirus) oncoprotein antibodies are specific to the viral tumor antigen, and the serology test measures these antibodies. After the treatment of the initial tumor (source of antigen), the oncoprotein antibody titer antibody titer An antibody titer reflects the amount of a particular antibody in the blood. decreases and the titer will increase if a new tumor arises. Thus, providing the rationale to use the serology test as a tumor marker to track disease. However, the average (median) time until the serology titer turns negative is approximately 8.5 months. During that time, while the serology titer decreases over several months, it would be measured as ‘positive’ even if there were no remaining disease (removed by surgery, radiation, etc.)

As such, it is possible that if a patient develops a small metastasis/recurrence immediately after the removal of large-volume primary disease, the serology titer would slightly decrease, but not as much as expected from the removal of the primary tumor (Please see picture below). While the tumor burden was accurately reflected in this case (the total amount of tumor in the body is less than at diagnosis), we cannot distinguish a new metastasis versus slower decrease of the titer. Thus, in terms of surveillance plans, we recommend utilizing scans (PET/CT or CT) along with a short term follow up serology (e.g. 2 months interval) to check the trend in cases in which serology titers do not fall rapidly (should decrease by 50% every 3 months or so initially). 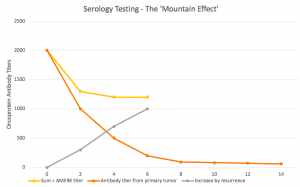 Picture depicts a scenario that a patient’s 5cm primary tumor on the arm was removed, followed by a 2cm recurrence in the axilla shortly after.

The blue small mountains are hard to be seen when they are hiding under the big mountains behind.