Dr. David Byrd, MD is a national leader in developing cancer staging systems, including those for Merkel cell carcinoma and malignant melanoma. 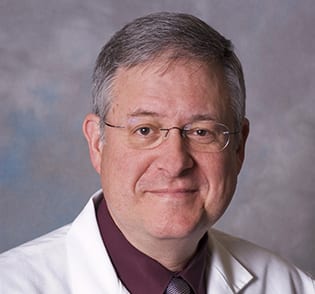 Dr. Byrd is the head of Surgical Oncology at the University of Washington and the Seattle Cancer Care Alliance. He is a key participant in the management of most of our patients and is particularly expert in the use of sentinel lymph node biopsies for managing complex skin cancers. He was the first surgeon to bring the sentinel lymph node biopsy technique to the Northwest. He is an expert in many surgical procedures, including the Whipple procedure used in pancreas cancer treatment. Dr. Byrd loved anatomy as he grew up and knew early on in life that he wanted to work in the service of others. And while he did play high school basketball—he stands at nearly six-foot-seven—he knew his future wasn’t in sports. Dr. Byrd attended Tulane University where he earned his Masters of Science degree as well as his medical degree. After a general surgery residency, he traveled to India and Pakistan where he did medical volunteer work for a year. He then returned to the United States where he completed fellowship training in surgical oncology at MD Anderson Cancer Center in Houston. Dr. Byrd came to Seattle in 1992 and helped to build the program at UW Medical Center, which has included growing the faculty and broadening the reach of the specialized surgical services they provide. Father to two sons, Dr. Byrd says he considers himself a cancer doctor first and a surgeon second. “The rewards are tremendous, not just the treatment aspect,” he says. From his life as a doctor and from his patients, Dr. Byrd says he’s learned that it’s the quality of time we have here that counts.