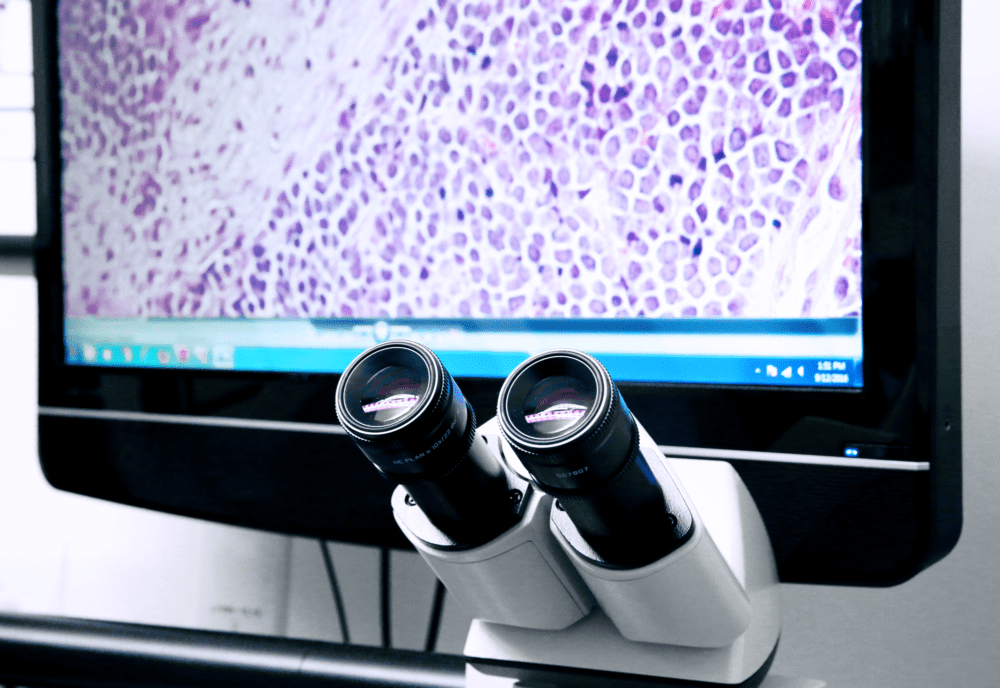 The diagnosis of MCC is made with a skin biopsy biopsy The removal of cells or tissue in order to determine the presence, characteristics, or extent of a disease by a pathologist usually using microscopic analysis. , which is then examined under the microscope by a pathologist pathologist A doctor who specializes in identifying diseases by examining cells and tissues under a microscope. . Common types of biopsy include a punch (a small core is taken) or a shave (part of the top of the lesion lesion An area of abnormal tissue that may be either benign or malignant. is removed with a scalpel).  The pathologist will then use special studies (called immunohistochemistry stains) to determine if a lesion is an MCC or another form of cancer cancer A term used to describe diseases in which abnormal cells continually divide without normal regulation. Cancerous cells may invade surrounding tissues and may spread to other regions of the body via blood and the lymphatic system. , such as small cell lung cancer (SCLC), lymphoma, or melanoma melanoma A form of skin cancer that begins in melanocytes (the skin cells that produce the pigment melanin). Melanoma affects about 42,000 Americans per year and has about a 15% mortality. . Each of these cancers has unique characteristics when examined with such special stains.

Determining if an MCC tumor is positive for the Merkel polyomavirus

About 80% of MCCs in the United States contain the Merkel polyomavirus Merkel polyomavirus The Merkel cell polyomavirus (MCPyV) is a very common virus that is often on our skin. It is not known to cause any common problems. Very rarely, it can lead to Merkel cell carcinoma. . A study of 282 MCC patients found that the risk of the cancer recurring was higher among patients whose tumors did not contain the virus (“virus-negative MCC tumors”). The typical way to test if the Merkel virus is present in a tumor is by using the CM2B4 antibody antibody A highly specific protein made by our bodies that can recognize and bind to an agent such as a bacteria or virus. which detects if the Merkel polyomavirus oncoprotein is present, and can be performed in many major pathology laboratories. The graph below shows that patients whose tumors are “virus negative” are more likely to have their tumors progress and thus should be followed more closely in order to catch a possible recurrence early (this difference is statistically significant, p = 0.011). 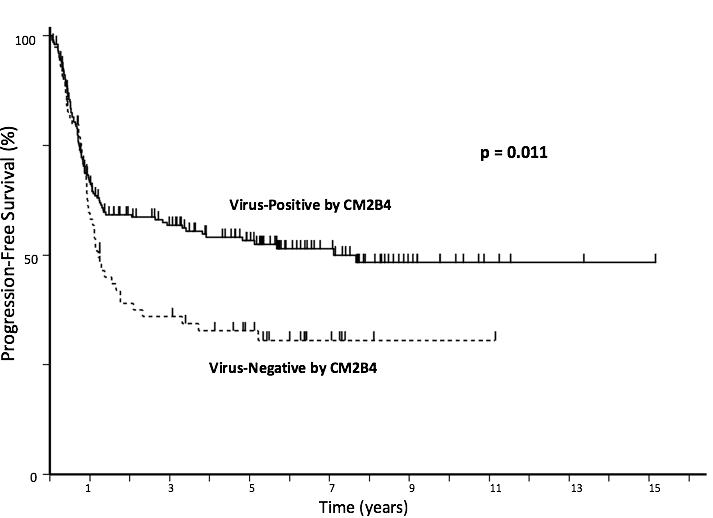 In order for a tumor to spread or metastasize, it needs to enter into vessels that carry blood or lymph fluid. Sometimes it is possible to actually see MCC tumor cells that have entered into such vessels within or around the tumor, which is called “lymphovascular invasion”.  An image of this process is shown below, where the vessel wall is stained pink and MCC tumor cells are stained dark purple (nuclei of the cells).

The presence of lymphovascular invasion (LVI) suggests there may be a higher risk that the cancer has spread. Indeed, several studies suggest that this is true in MCC, although the presence or absence of LVI has a much smaller effect on risk of recurrence than stage stage Physicians determine the stage of cancer by performing physical exams and tests. Stages describe the extent of cancer within the body, especially whether the disease has spread (metastasized) from the primary site to other parts of the body. at diagnosis, or even immune suppression. Many pathologists are not aware of the importance of this feature for MCC and it is often not included in the pathology report. This can be remedied by your physician (or you) contacting the pathologist and requesting that this be evaluated and that a comment be added to the report as to whether or not LVI was seen in the biopsy sample.

All patients will need a biopsy to determine if the suspicious lesion was MCC or something else. If a patient who has previously had an MCC develops a concerning lesion or an enlarged lymph node lymph node A rounded mass of lymphatic tissue that is usually surrounded by connective tissue and about the size of a green pea. Lymph nodes filter lymphatic fluid, also know as lymph, which is fluid that drains from the tissues of the body and contains immune cells. Cancer cells often travel through lymph vessels and lodge and grow in lymph nodes, sometimes causing the nodes to markedly increase in size. , a biopsy should also be taken at that time to see if the MCC has recurred.

Patients that have a suspicious lesion on a scan which cannot be safely accessed to obtain a biopsy. In such cases, watching if the lesion grows over 2-3 months may be a reasonable plan.

If a biopsy shows that a patient has newly diagnosed MCC, a scan ( CT scan CT scan A series of detailed 3-dimensional pictures of areas inside the body, taken from different angles; the pictures are created by a computer linked to an x-ray machine. Also called computerized axial tomography scan, computed tomography scan, CT scan, and computerized tomography. Contrast dye may be injected or taken orally to aid in accurately interpreting where in the body lesions occur. or PET-CT scan) is often obtained to determine if there is evidence the cancer has already spread.

It is important to consult an MCC specialist if the lesion that was biopsied turns out to be MCC in order to determine the best treatment recommendations for an individual case (surgery, radiation, and/or systemic systemic Affecting the entire body. Compare to local. therapy). If the lesion is another type of cancer, please see an appropriate specialist for treatment recommendations.

Is it very challenging for a pathologist to make the diagnosis of MCC?

While an MCC on the skin can look quite unconcerning (like a cyst or folliculitis lesion), under the microscope, MCC can easily be identified as a cancer of the ‘small blue round cell’ category.  When a lesion falls into that category, the pathologist almost always orders a set of tests as described above (CK20, TTF1, etc). In the vast majority of cases, the pattern of CK20 and other tests makes the diagnosis of MCC quite easy for the pathologist.

Clonal Integration of a Polyomavirus in Human Merkel Cell Carcinoma

Merkel cell carcinoma (MCC) is a rare but aggressive human skin cancer that typically affects elderly and immunosuppressed individuals, a feature suggestive of an infectious origin. We studied MCC samples by digital transcriptome subtraction and detected a fusion transcript between a previously unde...