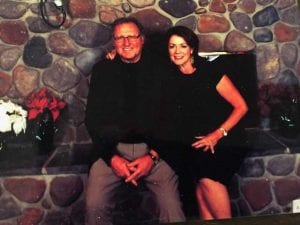 Robert Royer lost his year-long battle with Merkel cell carcinoma Merkel cell carcinoma A skin cancer composed of cells that look microscopically similar to normal Merkel cells present in the skin. MCC was first described in 1972 and only in the 1990s was the CK20 antibody developed to make it easily identifiable by pathologists. Many doctors and patients are not aware of this cancer because of its recent description and relative rarity (~2,000 cases/year in the US--roughly 30 times less common than melanoma). About 40% of patients treated for MCC will experience a recurrence, making it far more aggressive than most other types of skin cancer, including melanoma. on April 17, 2019, in the setting of also having chronic lymphocytic leukemia chronic lymphocytic leukemia A slow-growing type of leukemia (white blood cell cancer) associated with immune suppression. Patients with CLL have a markedly increased risk and severity of Merkel cell carcinoma. (CLL). Mr. Royer was a passionate civic leader, serving as deputy mayor for the city of Seattle from 1978 to 1983. To read the Seattle Times tribute to Mr. Royer please click here. For an extended historical article on Mr. Royer’s civil service and legacy, please click here.

Mr. Royer left a profound impact on Drs. Paul Nghiem, Kelly Paulson, and our extended MCC clinical and research teams. He was grateful that his beloved Seattle has become a leading center for research and clinical care of MCC. After working with the Seattle MCC team, Bob was excited about the research that is rapidly helping patients, as well as the training of many young, bright scientists on the team.

Bob was dismayed by how aggressive MCC can be, particularly in the setting of chronic lymphocytic leukemia (CLL) which leads to immune suppression. Indeed, MCC is nearly 50 times more likely to arise in patients with CLL, and this cancer cancer A term used to describe diseases in which abnormal cells continually divide without normal regulation. Cancerous cells may invade surrounding tissues and may spread to other regions of the body via blood and the lymphatic system. is particularly difficult to treat when CLL is also present. Excitingly, newly available approaches to treat CLL may also directly help treat MCC. In addition, treating the CLL may help return immune function to a more normal status, allowing the immune system to fight the MCC more effectively.

For all of these reasons, in Bob’s honor, we have created a fund to study and help patients who have both MCC & CLL.

If you would like to make a donation to contribute to this goal, in honor of Mr. Royer, please click here. When you reach the question “Is this a gift in honor or memory of someone?”, click ‘in honor’ and write in “Robert Royer”.